The Auragen™ System increases mental energy and focus. Experience a marked improvement in cognitive performance and memory, based on the newest discoveries in neuroscience.

You don’t have to settle for treatments that may not work, supplements that have difficulty crossing the blood-brain barrier, or internet memory games to improve your cognitive function. Marketing gimmicks flood the internet when it comes to the human mind and brain. If you’re trying to increase your mental energy, you need to help bring back the natural, peak processing performance and focused concentration that 40hz synchronized Gamma can deliver. Don’t just take a pill and wait to see if something happens, use a proven science.

If you want to maximize your mental performance, The Auragen Light and Sound System can help your brain work better. Whether you’re trying to optimize your memory retention, increase energy, and reduce stress, then Auragen provides a natural solution.

Bio-hacking is a new approach to wellness and living a better life. People of all ages are looking for ways to upgrade the brain and body, natural ways to enhance cognitive ability, and experience optimal wellness. If you are looking to achieve peak performance, improve concentration and memory retention, increase energy, and reduce stress, then Auragen provides solutions.

What Our Users Have to Say About Auragen 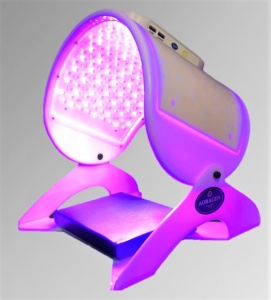 “I previously owned and used the earlier model of the light box called the “Dream Spa,” which did not include Gamma flicker. That model was also a godsend in its own right for me, really improving my ability to get to sleep and really helping with my general energy, resilience, and my ability to “let stress bounce off of me.” I also found that if stress built up over time, the Dream Spa helped me become aware of it. If I used the light any time after midafternoon, I could fall very deeply asleep almost immediately, awaking a short time later incredibly refreshed.

Give yourself the tools you need to support your brain

The brain needs energy to run at full capacity. The production of ATP in your brain is particularly important because, of all the cells in your body, neurons are the highest consumers of energy. Auragen’s technology increases cellular energy by stimulating the mitochondria to increase production of ATP (the body’s energy currency).  Boosting ATP production helps speed up cellular repair and renewal, providing energy for brain optimization. Auragen uses both 40Hz Gamma Entrainment and Red and Near-Infrared light therapy to boost ATP production.

Clean Up the Brain

Gamma boosts the functioning of microglia, the brain’s clean-up crew,  that removes toxins, dead neurons. and debris. In turn this boosts your mental energy and stamina, so  you don’t feel strained and tired while performing normal mental activities.  Additionally, the Auragen's dual delivery of light and sound increases neuronal activity and improves blood flow, delivering more oxygen and nutrients to the brain.

Aging, illness, and stress all negatively impact our ability to produce Gamma brainwaves.  The Auragen System helps bring back and enhance Gamma production in your brain. 40Hz Gamma waves are endogenous (natural) to the brain and are abundant in people who exhibit peak mental performance. The synchronization of light and sound with the Auragen System activates 40 hz, which in turn increases neuronal activity and improves blood flow, delivering more oxygen and nutrients to the brain. Lab studies performed in major US universities have demonstrated optimal benefits are achieved with synchronized delivery via the visual and the auditory cortex.

Auragen delivers the proven benefits of Red and Near-Infrared light therapy. These wavelengths improve circulation in the body, boost energy production, and accelerate cellular and tissue repair. These wavelengths are being used in many applications including the acceleration of wound healing and tissue repair, boosting of energy production, treatment of Traumatic Brain Injury and PTSD by the VA, and more.

Feel restored and renewed …and at your peak. Starting Today!